Another decade scanned!  Enjoy the vintage pictures within the 1960s maps.

Well, since we have some downtime, I’m slowly starting to add some inside scans.  1950s have been uploaded.  Enjoy!

Hope all is well with everyone.  Stay safe!

We have two new maps.  Disneyland kept the same Rise of the Resistance cover but the code changed to 021020.  The only change I see on the inside is new food and rides advertised on the main flap and they updated the informational section with a blurb about plant based food products.  DCA went with the Pixar Pier loop again.  Same changes with new food and rides featured on the inside flap and updated plant based food blurb.  DCA also added a blurb on the inside of the map about Alfresco Tasting Terrace featuring the “Disney Family of Wines” and appetizers.   These maps should be out until February 27th.  Happy Collecting.

Sorry, I was waiting until I got the official scans to post but they’re lagging on uploading them so I will do a quick post to let everyone know there are new maps.  Disneyland kept the same Rise of the Resistance cover but the code changed to 021020 so something must have changed on the inside.  DCA went with the Pixar Pier loop again but the surrounding color and tint is orange now instead of the red from last year.  These should be out until February 27th.  Happy Collecting.  I’ll update the lists once I receive official scans. 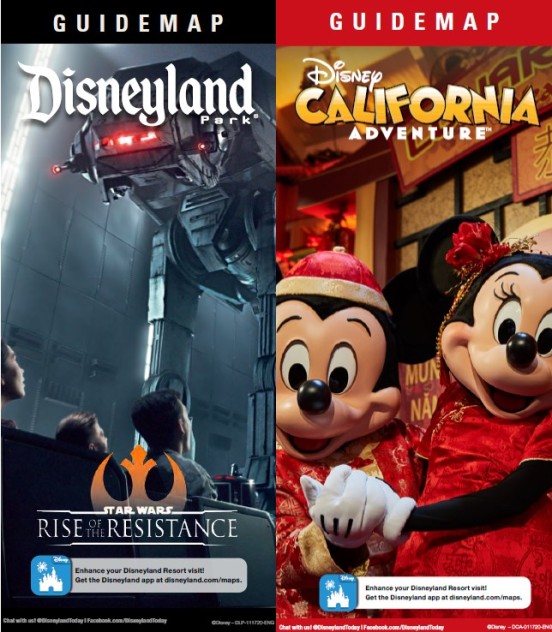 Rise of the Resistance opened to insane crowds today and I heard the boarding passes filled up within 5 minutes.  With the new ride, we get a new map with the AT-AT encounter on the cover.  Looks nice!  Also, Lunar New Year Celebration started today in DCA and we FINALLY got maps that don’t have the same Mulan cartoon on the cover like the past several years.  We now get Mickey & Minnie in their Lunar New Year garb.  These maps should be out until February 9th so get them now.  The beginning of the year is always busy for us map collectors. 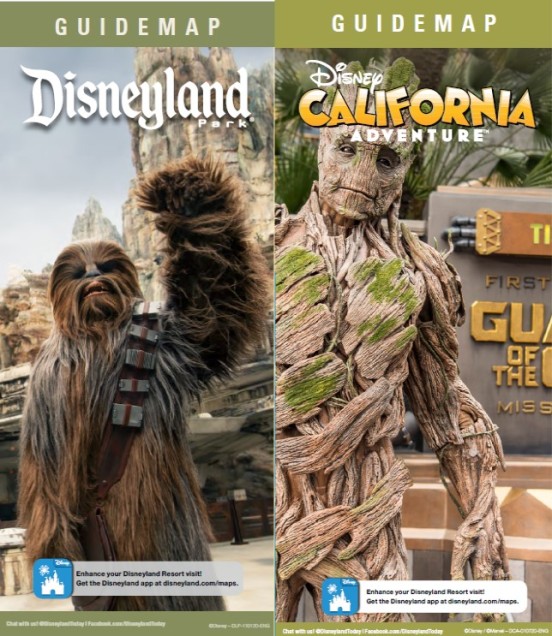 Happy 2020 and welcome to a new decade of Disneyland Resort Guide Maps.  New maps came out on January 7th since the HolidayTime maps ended on January 6th.  Disneyland features a new Chewbacca in Galaxys Edge cover while DCA features a new Groot in front of Guardians of the Galaxy cover.  The Disneyland map contains the Rise of the Resistance logo in the Galaxys Edge section with the opening date noted.  These maps should be out until January 16th at which time we’ll get some sort of Rise of the Resistance Map for DL and a Lunar New Year map for DCA (please not Mulan again).  Happy Collecting!

Just a heads up, the decline of New Years Eve guide maps goes even further.  Back from the late 90s to 2012, the parks would actually produced a special one night guide map for New Years Eve.  After 2012, they declined down to just having the normal holiday maps out and then doing a special one night only entertainment guide.  Well, now just when you think they couldn’t sink any lower.  This year, they kept the normal holiday maps out, the normal entertainment guides out and now produced a one sided cheap tips paper (see picture).  When I tweeted Disneyland to ask if they released a special map or even a special entertainment guide, they replied with some long worded response of trying to get me to use the app instead.  Sadly, the days of Disneyland Guide Maps ending seems to be coming sooner and sooner which is sad because they are the only Disney Parks in the world that seems to hate producing them or puts the least amount of effort into designing them.  Happy New Year everyone and Happy Collecting! 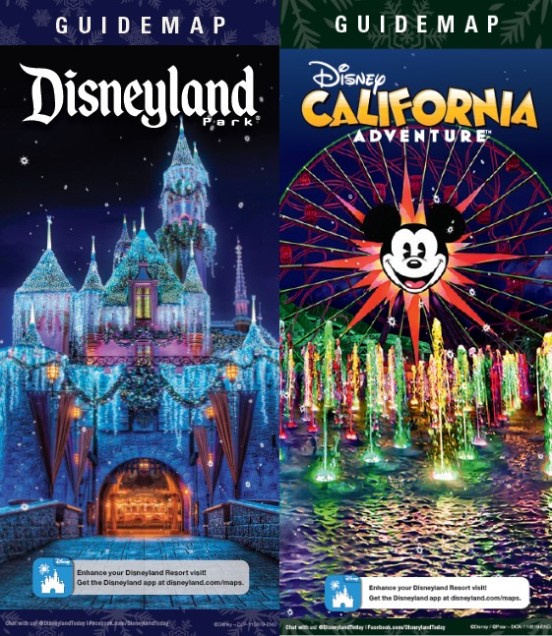 The new HolidayTime maps were released yesterday.  Although I feel they look like pictures from prior year maps at a slightly different angle, I do like the addition of the accent shapes in the background of the plain colored areas.  Adds some character.  These should be out until January 6th when the HolidayTime celebration ends.

The November Bridge Maps came out today and will be out until November 7th at which time we’ll get the next set of HolidayTime Maps.  I dig the covers.  The Disneyland map has the same overused Haunted Mansion Holiday picture but now with some eyes all over it.  The DCA has a cool Captain Marvel cover.  Get these maps now as they’ll only be out for 7 days.  Codes are DLP-110119-ENG & DCA-110119-ENG